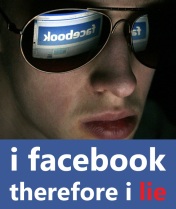 A study of 2,000 people found the average Facebook user carefully composes their profile – falsely painting a picture of an exciting social life, sophisticated tastes and glamorous photos. But 80 per cent confessed they have doctored photographs, linked to articles to appear intelligent, or tagged themselves at locations they’ve never visited. Fake relationship statuses, misleading profile pictures and fabricated status updates were other common cheats in the list of lies lurking behind the average online profile. The research, which was commissioned by domain specialists Siteopia.com, found a large percentage feel ‘relentless pressure’ to give off the impression they lead more exciting lives than the reality.
Here’s a list of the top 20 lies that occur the most on Facebook.

TOP FACEBOOK LIES
20.  Create a fake photo album
19.  Pose for a photo next to a car/house/motorbike that wasn’t yours
18.  Edit things you like to have more in common with someone you like
17.  Edit books/movies/music to look a bit cooler
16.  Made your education look better than it is
15.  Tag yourself or check in to a location you weren’t at
14.  Exaggerate qualifications
13.  Dress up/ exaggerate job role
12.  Make up a status or tweet because you want attention
11.  Sent a friend request to someone just because they were attractive
10.  Had a relationship status that’s wrong i.e. in a relationship when actually single
9.    Write a status exaggerating how ‘fun’ a party or social event was
8.    Use a profile picture of someone that wasn’t me
7.    Write a status or tweet which is a lie
6.    Message someone on Facebook you’ve never met
5.    Edit a picture to make yourself look more attractive
4.    ‘Like’ something to appear intellectual
3.    Read articles on newspaper app to appear clever
2.    Remove ‘ugly’ photos
1.    Use an old photo as a profile picture to look more attractive

Have you ever made one of these? Don’t lie to yourself…