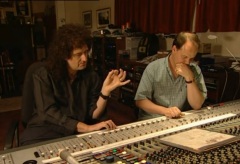 In this fascinating video, Queen guitarist Brian May goes back to the mixing board to explain the complexity of layers that went into realizing Mercury’s vision for the song. The original 24-track analogue recording system was far too limited, so the band used the ping-pong technique to “bounce” literally hundreds of overdubs into the mix. May explains how the operatic vocal layers were inspired by the “cascading strings” effect made famous by Annunzio Paolo Mantovani, a technique May first tried out in 1974 with the guitar solo on “Killer Queen.” The video is an excerpt from Inside the Rhapsody, a documentary that was included on the 2002 DVD Queen: Greatest Video Hits 1.
“Bohemian Rhapsody” by Queen is one of the most audacious pop songs ever made. Part ballad, part opera, part heavy metal orgasm, the song has six distinct sections and took over a month to record.  At just under six minutes, “Bohemian Rhapsody” was considered too long for pop radio. “The record company, in their infinite ignorance, of course immediately suggested that we cut it down,” said Queen drummer Roger Taylor, who stood by his band-mates and refused to let the song be cut. “It really was hit or miss. It was either going to be massive or it was going to be nothing.” This mesmerising video shows the process in which Queen made this unbelievable song.