Why did humans invent music?

Academic minds are always trying to come up with a theory. Charles Darwin believed music was created as a sexual come-on. Other theorists believe music was an attempt at social glue, a way to bring early humans together into a close-knit community. Chris Loersch, a senior research associate in psychology and neuroscience at the University of Colorado, likes that idea, and he’s done research to try and prove it. He and Nathan Arbuckle, from the Department of Social Sciences and Humanities at the University of Ontario Institute of Technology, designed a series of studies to bolster it.

“This hypothesis centres on music’s unique ability to influence the mood and behaviour of many people at once,” they write, “helping to mould individual beings into a coordinated group.” They cite the power of military music, music played at sports games, and “ritualized drumming” as examples.

In a series of seven studies, the two looked at the “emotional reactions” to music of 879 individuals from U.S. universities and from abroad. They also asked the respondents how much they identify with an in-group. The subjects who said they were most affected by the music they heard had a “higher need to belong.” Loersch, who was interviewed about the research, was quick to admit that this is not definitive proof but does help bolster the theory that “music evolved in service of group living.”

Does your theory explain why we pay lots of money to congregate with other fans at a concert?

I saw a bunch of Phish shows at one point. There’s a certain sense of community there, a lot of rules for how that community interacts with each other. People are bonding on a large scale, treating everybody that’s camping around them as family members. I think that’s what concerts are about, really becoming a group with those people around you. We put a YouTube link to a concert in the paper, where somebody on stage starts waving hands to the right and left and all these people with huge intense smiles engage in exact same behaviour. You can see on their faces that music is having the most intense positive effect. Forty thousand people are completely bound up in being a group member.

But you’re not exactly best friends with all those people?
Even though you don’t know them at all, part of our theory is that the music is there to bind you and control you, not as an individual but as a member of a group. As humans our primary motivation in life is to be a good group member. People start to feel great when they lose their individual identity and become part of this larger whole.

Sometimes people boo at concerts.
I think we boo other social behaviour all the time, not explicitly. When people don’t hold up their end of a social contract, that’s what gets you ostracised from a group.

So if a musician shows up late or puts on a bad show, they’re fair game for booing?
I don’t think musicians are immune from that ostracism just because they happen to be in control.

If music is all about connecting us to a group, why do people listen in solitude as well?

I think even when you listen by yourself, what makes that feel good is that you are kind of being tricked—much like when you watch TV—into thinking you’re interacting with people, tricked into thinking you’re part of a group. Our core motivation is to feel like we belong. Anything that tricks you into feeling that way is going to feel rewarding, you’re going to pursue that like a drug.

How do you regard the theory that music was invented as a sexual lure?
What we would argue is you play music and that gives you power to control a large group of people and power is attractive to the opposite sex.

Who’s your favourite musician?
My favourite artist is Stevie Wonder: I think he’s incredibly effective at communicating emotions. He makes you feel what he feels. And he clearly feels a lot. 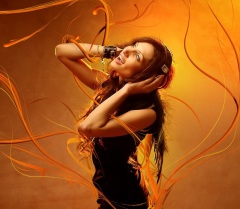 Humans did not invent music. It is a flawed assumption that we invented music. We can say that humans are musical for the most part but we didn’t invent music just as we didn’t invent electricity. We discovered it. Yes we were probably singing and banging on rocks long before we knew this but we didn’t invent music like somebody invented the wheel or an iPhone we discovered it in nature. It was already there. Nevertheless, music might provide a way to be, taking some stress out of a confusing life by giving something to rest on. The rhythm, the melody, and the harmony all provide a way of being that allows someone to do a bit less work for the time being if they agree with the way that is being presented. Just imagine life without it, it would be a world I wouldn’t want to live in.